During a recent Corporate Day this outdoor event included creating a Children’s space where people could make cardboard cars for the drive in movie tent that screened the movie ‘Herbie rides again’. The children definitely enjoyed being creative and had a sense of achievement from their finished creations. This outdoor activity on our Pop Up campsite is one of many. We also offer field attractions, family friendly activities and team building exercises for corporate events. One of our most popular things to do especially for families and all ages is learning Bushcraft with Steve of Axe and Paddle Bushcraft.

In addition to the Bushcraft experience there are extras available such as a Billy Can Breakfast and wood fired pizzas. 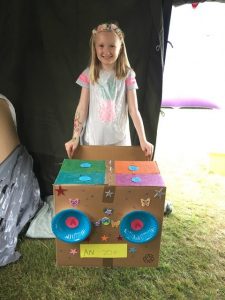 Pictured above is one of the many brilliant cardboard car creations made for fun in the outdoor children’s space and used as part of the drive in movie experience on site.

Directed by Robert Stevenson and made by Walt Disney Productions starring an anthropomorphic (and fairly autonomous) 1963 Volkswagen racing Beetle named Herbie ‘Herbie Rides Again’ is a ‘comedy film, based on the story by Gordon Buford, from the 1970’s and a sequel to The Love Bug. The movie stars Ken Berry, Helen Hayes, Stefanie Powers and Keenan Wynn reprising his villainous role as Alonzo Hawk (originated in the films Son of Flubber and The Absent-Minded Professor)

The trailer for the 1975 British comedy films Monty Python and the Holy Grail reference the title.

To find out more about our outdoor catering, facilities, activities and camping options contact us here

This website uses cookies to improve your experience while you navigate through the website. Out of these, the cookies that are categorized as necessary are stored on your browser as they are essential for the working of basic functionalities of the website. We also use third-party cookies that help us analyze and understand how you use this website. These cookies will be stored in your browser only with your consent. You also have the option to opt-out of these cookies. But opting out of some of these cookies may affect your browsing experience.
Necessary Always Enabled
Necessary cookies are absolutely essential for the website to function properly. This category only includes cookies that ensures basic functionalities and security features of the website. These cookies do not store any personal information.
Non-necessary
Any cookies that may not be particularly necessary for the website to function and is used specifically to collect user personal data via analytics, ads, other embedded contents are termed as non-necessary cookies. It is mandatory to procure user consent prior to running these cookies on your website.
SAVE & ACCEPT